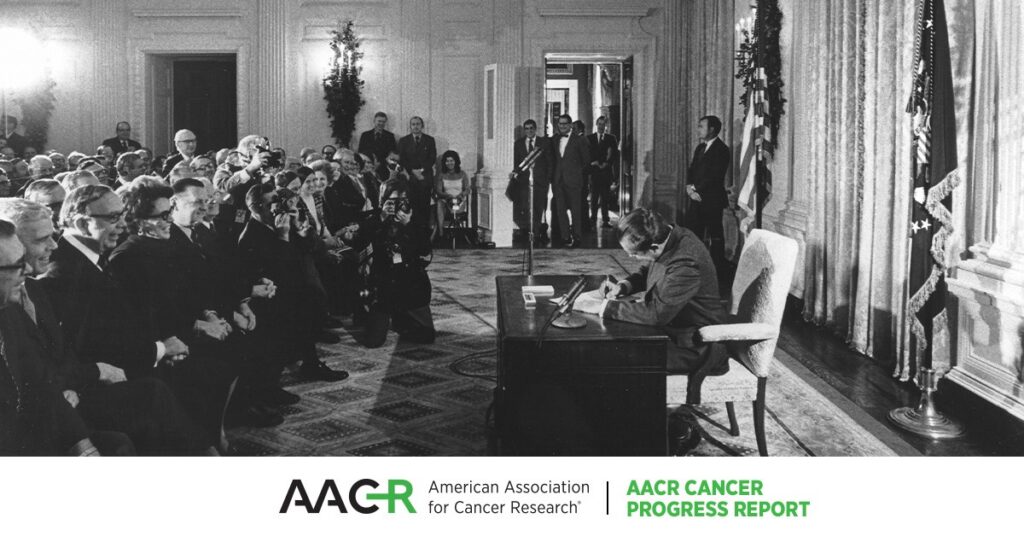 50th Anniversary of the National Cancer Act of 1971

The year 2021 marks the 50th anniversary of the National Cancer Act of 1971, a groundbreaking legislation that launched a national commitment to making progress against cancer by providing the National Cancer Institute (NCI) with broad authorities and innovative mechanisms to drive our understanding of this devastating collection of diseases. Years of advocacy by patients and survivors of cancer, researchers, physicians, and others led to the introduction and eventual passage of the bill, which was signed into law by President Richard Nixon on December 23, 1971.

The National Cancer Act significantly expanded the authority of the NCI director, making the position a presidential appointment and authorizing the director to submit a professional judgment or “bypass” budget directly to the president. This annual budget outlines opportunities in cancer research and the funds needed to fulfill them. The legislation also mandated the establishment of the National Cancer Advisory Board, a panel of experts that advises and assists NCI in carrying out its programs, as well as the creation of the President’s Cancer Panel, a three-member group that submits an annual report to the President on selected topics in cancer research.

One of the most consequential provisions of the National Cancer Act was the establishment of the NCI Cancer Centers Program to recognize and support institutions across the country that are leading the way in cancer treatment, diagnosis, and prevention. The legislation initially provided the funding to establish 15 cancer research centers and local cancer control programs. Today, there are 71 NCI-designated cancer centers across 36 states and the District of Columbia.

In the fifty years since the Act was signed into law, NCI-designated cancer centers have been at the forefront of new discoveries in basic, clinical, and translational science that have revolutionized the way we understand and treat cancer. These centers also serve as the point of care for patients in their communities and beyond, providing access to the best treatments currently available as well as cutting-edge new therapies through clinical trials. Many of these institutions also provide community-based cancer screening services and public education in collaboration with local partners. Additionally, NCI-designated cancer centers lead the way in training the next generation of cancer scientists through a variety of educational programs, fellowships, and mentorship opportunities.